If you're reading this post, you've probably arrived at the point in your calculus course where they try to teach you how to do integration by partial fraction expansion. And if you're anything like I was when I first learned calculus, you're probably scratching your head and going whadafuhhhh? What is the point of all this?

Here's what you need to know. Partial fraction expansion is not an integration technique. It's an algebraic technique. That being said, it's useful for making certain algebraic expressions (i.e. rational expressions) easier to integrate by breaking them into smaller, simpler chunks. Sound familiar? Its that same mode of thinking that all your other calculus classes are pushing at - taking a difficult problem, decomposing it into several easier problems, and then putting the pieces back together.

Got it? Let's get down to business. Here's our problem:

Just to quickly review the steps (these should be in your textbook, or any online resource), the technique proceeds as follows:

Now, you may be wondering why we have two different partial fractions corresponding to the same quadratic factor \((x^2+x+1)\). Also, why does one of those terms have an \(x\) in the numerator? The answer to both of those comes from a different course - linear algebra. Yes I know, you probably haven't taken that course yet, and its unfair, but that's life. I'll try to explain it the best I can:

Got it? To solve for \(A\), \(B\), and \(C\), we multiply both sides of the equation by the entire denominator of our original expression and simplify: 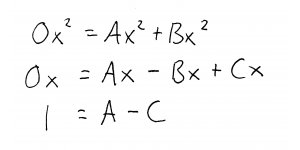 Dividing through by the corresponding powers of \(x\) in each equation, we get the following system of 3 equations with 3 unknowns: 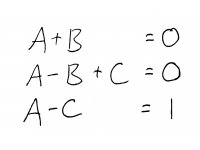 Now that we have this system of equations, we can solve it using any of the techniques for solving simultaneous equations. We could use either substitution or an elimination method alone, but I am going to use a hybrid approach by adding equations in such a way that eliminates one or more of the unknowns, and then substitute. Adding the second and third equations, we eliminate \(C\): 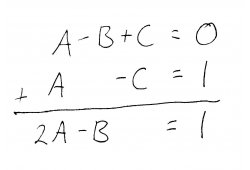 Now we can add this new equation to the first equation, eliminate \(B\), and solve for \(A\): 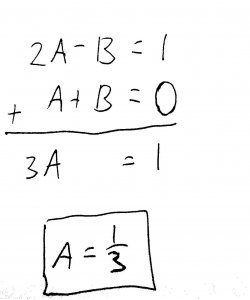 Plugging our value of \(A\) back into the first equation, we solve for \(B\): 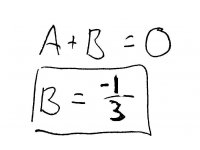 And finally, plugging our value of \(A\) back into the third equation, we solve for \(C\): 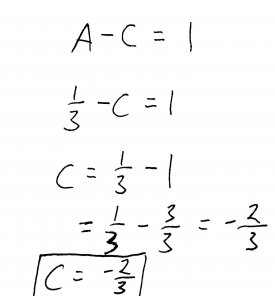 And there you have it. The right-hand side, our partial fraction expansion, makes it possible to do things we couldn't otherwise do with the original expression. For example, it would be impossible to directly integrate the original expression, but we know how to integrate these partial fraction terms. The first term can be integrated using a simple u-substitution, while the second and third terms would require completing the square and doing a trigonometric substitution (yuck!) Hey, no one said it would be easy, but at least now its possible.

The reason that partial fractions tend to give students so much trouble is that is brings together a whole bunch of different issues and techniques: polynomial long division, linear independence of functions, and solving systems of equations to name a few. On top of that, if the end goal is to integrate the expression, you might have to pull out all of the other integration techniques you've just learned in the past few weeks. The key with partial fraction problems is to take your time, carefully write down the correct form of the expansion, and then methodically work through finding the coefficients. Good luck!

Like this article? Check out more posts about Calc 2....